There are three types of TV systems in the world. One is the NTSC (COLOR) and EIA (B/W) systems, adopted in Japan and the United States. The other two are the PAL (COLOR), SECAM（COLOR）and CCIR（B/W）systems that are adopted in Europe. The big differences between the systems are the number of frames (frame/sec) and scanning lines.

Scanning Line
Scanning horizontally from top to bottom makes a TV picture. The total number of these horizontal lines is defined as “number of scanning line.” NTSC/EIA consists of 525 horizontal lines, and PAL / CCIR / SECAM is 625 lines. Actually, scanning is not once per frame but twice interlaced, therefore scanning every other line makes full screen. The 525 lines of NTSC/EIA are separated into even and odd numbers, and scanned twice to produce one screen.

Aspect Ratio
Aspect ratio is the ratio of TV screen width to length. The aspect ratio for an ordinary TV screen (NTSC,OAL,SECAM system) is 4：3. 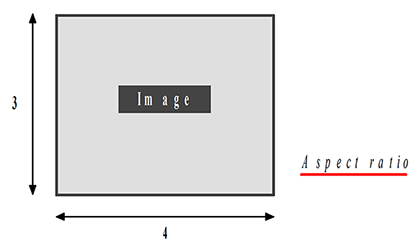 Color Signal
This is a kind of signal, which controls chromaticity for Color TV picture. The color signal splits them into various components, complying with each system, and controls them. The NTSC system splits the signal into luminance and chrominance. The signal produced by a color camera consists of the three primary colors R(Red), B(Blue), and G(Green). By combining these three signals at a following rate, it can get a luminance signal equivalent to B/W TV.

To gain color TV signal, R-Y signal and B-Y signal will be transmitted along sub-carrier with luminance oscillating signal by frequency multi-channel telegraphy. The principal purpose of this system is to transmit luminance and color signal without any interference, by setting video signal bandwidth within 4.2 MHz.

CCD (Charged Coupled Device) image sensor
Charged Coupled Device that converts optical signal to electronic signal. CCD is composed of photodiode arrays that produce electric charges according to strength of optical signal and the register part that transfers the electric charges to vertical and horizontal directions to read them out as signal voltage. A device that uses CCD in the register part is called CCD image sensor and is often called simply CCD.

Field Storage
Field storage system exposes in one field period and reads out combined photoelectric conversion signals of adjacent two lines in order to compensate the reduced signal level, which becomes a half of the signal level of frame storage, resulting from a half of the exposure time of frame storage system. The system changes the combination of the two lines at each field to adopt to the interlace methods.
Exposure time＝1 field(NTSC: 1/60sec.)

AGC (Automatic Gain Control)
AGC automatically controls amplifier gain to prevent the signal saturation when the input light is strong, and increases gain to the regulated level to maintain the appropriate signal level when the input light is weak. It enables to take pictures with fixed lens iris from dark to bright place within the limited range.

AE (Automatic Exposure)
Automatic exposure function detects the brightness of the photographic subject to adjust the iris of lens and shutter speed automatically.

Gamma correction
Cathode-ray tubes generally used for TV have non-linear electric-light conversion characteristic which is expressed as Gamma = 2.2. In order that the optical input level to a camera proportions to the light emitting level from cathode-ray tubes, the picture output signal from a camera must be compensated. The Gamma compensation that is equals to 0.45 must be made for the output signal of usual CCD camera.

＊In the event of grabbing images from a camera by a grabber board or other appropriate equipment for the purpose of an analysis of density, the gradation correction (Gamma correction factor = 0.45) is not available.

DSP (Digital Signal Processing)
Against the conventional analog signal processing, a camera uses digital signal processing circuit with A/D (Analog to Digital) converter to obtain picture signal. The camera provides various picture outputs including analog signal and a variety of formats of digital signal. Generally, the signal is processed in analog format from the output CCD image sensor to correlated double sample hold circuit and AGC.
Merits for equipped DSP
1) Smaller camera: Due to miniaturization technology of the substrate circuit
2) High quality consistency: Reduction of inconsistency under a manufacturing process in a mass production.
3) Improvement of the image quality: Greater IC chip density of DSP allows reduction of signal noise and precise image adjustment under a DSP parameter

S/N Ratio (Signal-to-Noise ratio)
The ratio between signal and noise, and the higher S/N value represent the less noise and higher quality picture.

Electronic Iris / Electronic Shutter
In order to maintain the CCD output level within a certain range regardless of the input optical level, the time to store electric charge is changed per each frame.

Long-term exposure
Enable the high sensitivity shooting with longer electric storage time (several fields) of the CCD. This is effective for the motionless object.

Coaxial transmission system
This system permits the video signal and DC power to be transmitted in the same cable. This method reduces installation costs and improves function by transmitting power and video signal on one cable.

The camera has the following white balance function.

3) P.W.B (Push rock White Balance)
The white balance is corrected in conditions when the above preset modes are ineffective due to extreme color temperature situations.

Backlight Compensation
This is a function that prevents the subject from appearing as “Black Subject” on a display, when it is a back lighted or high-luminance subject.

Backlight Compensation procedure for each camera is as follows.

The lens is the most important part of the Camera. In addition to proper camera selection, the lens must be selected in accordance with the purpose and site condition.

Two of the most important points to consider in selecting a lens is, which area is to be shot and what scale is desired when the picture is projected onto a monitor screen. The area being shot is called “Angle of View.” That depends on the focal length. In general, it has a dependence on f/number. The lower the F/number, the wider the ‘Angle of view’ can be. On the other hand, as the F/number increases, more depth of field is available.

A Zoom Lens has a variable focal length and is convenient for rapidly changing from close-up shots to distant shots. There are two types of Zoom Lens, “Manual control” and “Remote Control.”

How to decide the focal length.

The focal length can be calculated adequately by the following formula if the distance between a camera and a subject and widths of the subject are found.

How to decide the shooting area.

The shooting area can be calculated by the following formula with the focal length (mm) of Lens.

The shooting area and size depend on the focal length. It is very important to select adequate Lens to meet the shooting purpose

＊Due to the downsizing camera, CCD image size became smaller. Now there are three types of CCD, 1/2, 1/3, and 1/4 inch, in our products.

Each angle of view is as follows

Fixed Lens
It is also called “Fixed Focal Length Lens.” Since the focal length is always fixed, the angle of view does not vary. It is classified as below in accordance with the focal length.

Manual Iris / Auto Iris Lens
“Iris” controls a quantity of light complying with the variation of illuminance. The brightness of Lens can be expressed by f/number, and here it stands for the ratio of effective Lens bores.

Auto Iris Lens
“Video Iris Lens,” one of the Auto Iris lenses, self-contains an Iris Control Amp (EE Amp). All our products are classified in this type. To control the Iris automatically, Iris is closed when the video signal is judged a greater level, and Iris is opened if it is smaller. That is, Auto Iris Lens keeps the adequate correct exposure automatically so that the video signal from camera can keep at a constant level. 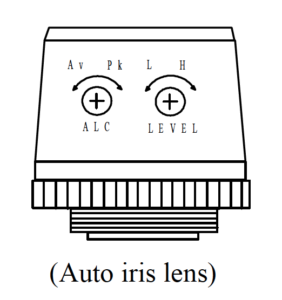 DC Iris Lens does not equip Iris Control Amp (EE Amp) in Lens, and controls the Iris by applied driving power from camera.
(Our WATEC camera does not match with any DC Iris Lens.)

Flange Back / Back Focus / Mechanical Back
Flange Back is the distance between fiducial face (Flange) of mounting Lens and focused face, and has C-mount and CS-mount

＊CS-mount Lens is mainly available for 1/3″ CCD camera, but recently both are acceptable by applying C-mount adaptor or flange back adjustment
CS-mount (Flange） = 12.526mm (for 1/3inch CCD camera)

＊Back Focus
Back Focus is a distance between the top of Lens face and focused face. It is helpful not to occur interference between the tail of camera and mechanical parts in the camera mount, when you mount the Lens on camera

Variofocal Lens has a manual scaling function and enables to decide the focal length manually. After setting the angle of value by zoom and focus, adjust the focus of the Lens applying some adjustment for Flange Back

When you set a camera, you can choose an adequate focal length to be able to show out the subject as your favorite size while watching the monitor screen.

When focusing on a subject, there is a range in front of and behind the subject that can also be in focus. This range is called “Depth.” Only objects within this range (or depth) can be in focus. Iris has some important functions. It not only determines the amount of exposure but it also determines the depth of focus. 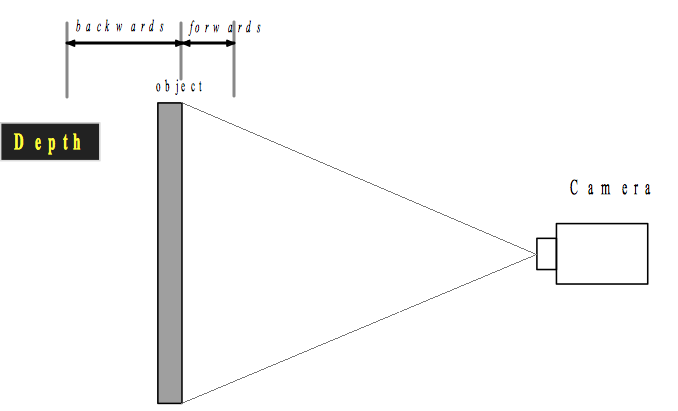 We would love to hear from you.

Looking for videos, news and industry insights? Follow us on our social media channels.